Turkish Taffy: Back in 2003 I began reading My Name Is Red by Orhan Pamuk. Pamuk is a Turkish writer who received the Nobel prize for literature. Totally bored and confused by the book, I passed it on unfinished to the director of WestConn U’s Haas Library. He shrieked that Pamuk was a great writer. I shrugged; not my cup of tea. Elif Batuman writing in The New Yorker [Nov. 24 issue] said she was asked not only about Pamuk but about her inability to finish Pamuk. “Why don’t we talk about something else?” she asked. “I’ll tell you why,” the Turkish interviewer responded. “None of us can finish Pamuk, but you’re the only one who says so openly.” I feel vindicated.

Score Card: I’ve finished (or am still reading) 27 books this year and it’s not yet Halloween. My bogey is two dozen books a year. Less than that, I’ve either begun writing another turgid novel or goofing off. My scorecard is a Readlist of title and author I’ve maintained since 1971. Maintaining a score card also keeps me from wallowing in science fiction or mystery/detective genres.

The first half dozen “reads” that year were The Greening of America (William Reich), Future Shock," (Alvin Toffler), Diary of an Old Man (Junichiro Tanizaki), War and Peace in a Global Village (Marshall McLuhan), Blue Movie (Terry Southern) and Cat's Cradle (Kurt Vonnegut). So many “must read” authors back then. But nowadays, does any college student pick up Magister Ludi by Herman Hesse or anything by Buckminister Fuller or William Burroughs? Perhaps the bestsellers define our thinking as much as we search for truths that become bestsellers.

E-Books for Ephemera: I think I’ve reached a conclusion as to which books to download and which deserve killing a tree. If I don’t care to shelve it in the bookcase and go back to it as an asset, I find the electronic version. I download books written by friends and acquaintances because — face it — none of them are beauties like Colson Whitehead’s Colossus of New York or textually thick resources like David Hackett Fischer’s 900-page, heavily footnoted Albion’s Seed.

Like most readers, I also regularly flip back to confirm a character or situation, flip ahead to see where the next chapter break is, or meander to the table of contents or author’s bio as my own amuse bouche. This demands paper leaves with all their smell and typography. And, truthfully, I love bookmarks, always adding to my little collection from Borders (R.I.P.), the Coop in Harvard Square, the Bryn Mawr Bookstore, Porter Square Books, Mad Tom’s in Manchester, Heffer’s in Cambridge, England, and the Globe in Boston. E-books are unable to engender or hold memories.
at 12:49 PM No comments:

I suppose it was revolutionary when the codex replaced the papyrus scroll, just as the e-book reader is replacing the bound volume. But is the actual writing keeping up with readers’ expectations? Is stylistic form following function?

In 2005, the Japanese use of emoticons — kaomoji, or face marks — far outstripped Western usage. And, in 2008, Yume-Hotaru's first novel became a best-seller in Japanese bookstores; he wrote it entirely with his thumbs. His novel, First Experience, a story about love and sex in high school, became a top title in one of Tokyo's biggest bookstores.

Since it emerged in Japan nearly a decade ago, the cell phone novel -- keitai shosetsu — has moved from a little-known subgenre to a mainstream literary phenomenon. Today, keitai shosetsu sites boast billions of monthly users, while publishers sell millions of copies of cellular stories taken from phones and turned into paperback. 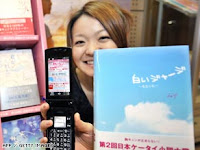 By 2007, half of Japan’s 10 best-selling novels were written on cell phones,

I began wrestling with this thought a few years ago when netspeak began appearing on cell phones. (“R u listening? Lol.”) And, to some extent, leet (733T) speak became a secret code. (Oh, I was so proud of myself when I deciphered someone’s e-mail address—disbm3g—as a phonetic of her name.)

Last week, a neophyte writer in our bricks-and-mortar group read an e-mail diary: Letters written to herself. While the writing was rough, it was insightful in an epistemological way. I think she’s on to something if it can be polished.

Similarly, “Big Biz @ the Mall” was an experiment in the quotidian way people write on Facebook and in their instant messaging. (You can read “Big Biz” diary writing in The Corner Club Press,, pp. 50-51, at http://www.thecornerclubpress.com/uploads/6/0/5/3/6053731/the_corner_club_press_issue_4.pdf)

I’ve just subbed a second story in the same style to another market. “Movin to the Moon” follows a girl in crisis...

“R u suffering a midlife crisis” she asks, all serious like Dr. Phil.

Just a tiny one I tell her, but it might be PMS. Then I see a guy w/ a mic interviewing people. Hes got a PA system and is wearing a necktie so I know it’s the real deal. I shout ITS SHOW TIME!!! All the geri freaks wake up and stare. “Time for Beauty and the B***h!” I shout to the old guy near me. Hard to read? Jarring to those literate senses honed in English Lit 101? Yeah, it might be. In fact, I feel sympathetic for those 3rd century Romans wondering why they stopped making scrolls.
at 1:08 PM No comments: