Is anyone else as prickled as I am when coming to the center spread of a New York Times supplement only to find a double-truck story?  That’s the spread in this week’s “Sunday Review” that marches across eight columns of type and art from page 6 to page 7.  It features a 10-panel cartoon about pasta and, below, some 3,000 words asking “Why Are There No People of Color in Children’s Books?”

My arms open wide to see the extent of this ocean of typography and art.  If I start here in column one then  how far is it to the end?  Although I no longer commute, the “end” is usually the nose of the person sitting next to me.

As a former train and bus commuter I learned early on to open the Times vertically, then fold it vertically again.  This minimizes the space I (the party of the first part) intrude on the personal space occupied by my fellow passenger (the party of the second part) sharing a bench seat.  This courtesy is a small part of what helps everyone get along.

Why do the art directors — perhaps copy editors — do this?  Simply because they can.  These are the same people that fill a page with black ink and drop out the type in white making it impossible to read.  They’re the same Look-at-Me designers who run boxes of insignificant blurbs in 6- or 8-point type.  When I see these sections I know it’s time to stop, take off my glasses and squint to find some 50-word colloquy on current opinion.

“Simply because they can” is not a defensible approach to design, layout or publishing.  Or keeping peace with the fellow passengers in your life.

Why’s the Smoke Alarm Over My Collection and Not in the Kids’ Room? 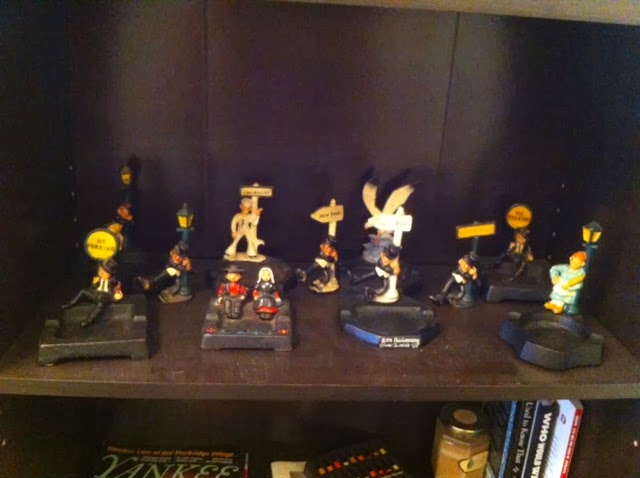 I’ll confess that I’m fascinated with watching American Pickers in TV. Now, my 7-year-old grandson also is captivated by the show…for hours at a time. I think there’s something in our DNA.

This faintly sociopathic hobby of collecting began for me at an early age. What 10-year-old wouldn’t begin picking up matchbooks with bathing beauties as art? Sure, my mother worked to collect one American coin of every denomination and every mint, but coins bored me. Forty years later, I put away every Joe Camel matchbook I came across, and now there are three metal lunchboxes full of them.


While taking my daughter to her job at the Englishtown, N.J., flea market in the ‘80s, I began wondering how many fast-food-franchise drinking glasses were made, and when they began as premiums. There was a universe out there that needed mapping. In the process of buying and selling, and traipsing Englishtown every Saturday, I ended up with 300 or 400 glasses.


I’ve mellowed since then. My sights have dimmed, and I no longer want to collect one of everything. Just a few items. Like those junior pilot wings the airlines gave to kids. Decks of playing cards with advertising. White knob windup toys. Bronze bookends. Cast iron ashtrays. Piggy banks and pig representations. Clay bricks embossed with the manufacturer’s name. Unusual cigarette lighters. Books marks to hold your place without dog-earing a page. Swizzle sticks featuring the restaurant or bar name. And pens with moving dioramas and objects — like bathing beauties whose swimsuits drop when you turn the pen upside down.


This is the ephemera that measures our past, like the jewel-bedecked wire toogles you mom used to hang her purse at a restaurant table or the plastic thingies a woman used to dial a telephone without breaking her fingernail. They're gone now. All gone. Our culture ebbs and flows with a tidal wash of stuff. And when you touch one of these old objects, your mind goes back to recapture other times and other places.
at 9:58 AM No comments: