Who was the writer who suggested — fictionally — that someone remains immortal until his or her last friend passes on? Seems sort of abrupt, doesn’t it? Given this dollar-store theology, I’d opt for saying you’re “alive” until you’re no longer remembered by anyone. I didn’t invent statues collecting bird shit in the town square, nor tombstones in the marble orchard. But I can do them one better and suggest the World Wide Web is a good option for immortality.

Several years ago I idly Googled my grandmother’s name. She had been a lecturer on the Chautauqua Circuit from 1908 until the ‘20s, traveling the country as America’s Foremost Cartoonist. It was fascinating to discover the University of Iowa had an extensive digital collection of Chautauqua information. I added to the trove with a carton of Marion Fisk’s papers, photos, lecture notes and anecdotal stories. The archivist at the U of I libraries exclaimed, “We had notes and programs and schedules, but until now we had no idea what the actual content of the programs involved!” Marion Fisk was given a new lease on life, at http://www.lib.uiowa.edu/spec-coll/MSC/ToMsc200/MsC150.09/MsC746_Fisk.htm. 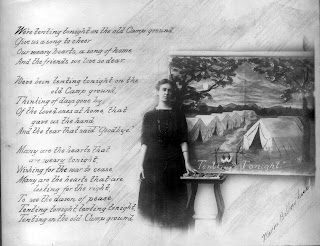 Through this grandmother, whom we affectionately called “Moms,” I brought her father to life again with a piece of our family history, at http://www.copperfieldreview.com/non_fiction/chautauqua_circuit.htm. Moms would tell my brother and me stories as we curled up in her rope-strung four-poster. One of the stories was about the most famous song to come out of the Civil War — “Tenting Tonight on the Old Camp Ground.” It was the song that made the name of its composer, Walter Kittredge, known and loved all over our country a century and a half ago. Kittredge would visit my great-grandfather Ballou and they’d sing “Tenting Tonight.” The warmth of the “tent” formed by Moms’ canopied bed and the warmth of all those memories can still comfort us.

I confess to doing a Google search of my own name and of other family members. But that’s a story for another time.
at 12:44 PM No comments: