Where Has the Music Gone? 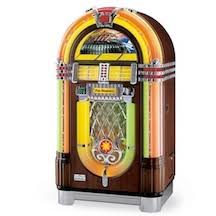 I was watching Ron Howard and Richard Dreyfus in the 1973 film, American Graffiti the other night.  I  noticed how music set the theme of the high schoolers’ last night together.  There was the coffee shop jukebox, the car radios and the 45 rpm records playing such hits as “At the Hop.”  Where are they now?  Not the students, but the records and jukeboxes?

Today’s kids have their phones in hand and plugs in their ears to stay connected.

I grew up listening to music on 45 rpm discs, snorting at my folks’ old RCA 78 rpm record player in a giant piece of furniture.  But then we were all saved by the cassette tape back in the ‘60s.  Oh, there was the eight-track tape cartridge that disappeared rather quickly.  Singers who were recorded only on eight-track were soon orphaned, never to be heard from again.

This is the speed of technology.

In 1965, I was working at Western Electric up in the Kearny, NJ, Meadows.  AT&T introduced the Touch Tone while I was there, and asked visitors how much quicker they could use the new technology.  Well, for me, I found I was making three wrong numbers in the time it used to take to make one.  (Later I wondered why we continue to say we’re “dialing” a phone number?)

My trouble is that I like old stuff and feel a kind of loss when those objects disappear,  My grandmother’s mechanical carpet sweeper with a wooden body was an architectural beauty.  My Dad’s brace and bits are still terrific for drilling boards.  And Mom’s cast iron frying pans are good for another century.

I know this dates me, but I started working as a cub newspaper reporter using a Royal manual typewriter and a Speed Graphic camera that could have been the property of Superman’s Clark Kent.

It’s difficult playing catch-up when the world is accelerating.  I tried sharing my CDs with my daughter, knowing she liked certain artists.  But she said, “No more CD player at home.  No phonograph either.  We stream everything from our phones.”

Okay.  I understand, and I can get with the program.  All I have to do is get one of the kids to bail me out when the computer acts crazy and files disappear.  Then I go back to my old-timey music and typewriter.

I knew I was no longer home when I moved to New Jersey and asked a clerk to give me a sack for my purchase.  “Sack?”she almost shouted.  “D’ja mean bag?  Wherja come from?”

Jersey has an identity problem, lying between Phil’delphia and N’yawk, both in its distinctive accent and the words we choose.  It starts with the little things, like telling someone “I’m going down the shore.”  Never the beach.  Or looking curiously at the bennies (from Brooklyn, Elizabeth, Newark and New York).  Or believing jug handles are part of the natural order of road intersections.

There’s a bit of both Philly and the City in the way we talk.  Oops, I meant to say tawk when you ask for a cuppa cawfee at a diner.  Linguist Ann Şen (pronounced Shen) at the University of Rochester suggests the “aw” sound  for “o” is a carryover from the Revolutionary War when Tories wanted to sounded more Brit.  So we have the towns of Fai-uh Lawn and Fawt Lee on Route Faw.

You can see distinctions between north and south Jersey accents divided somewhere along the line that separates the 201/908 and 609  area codes.  We’re in 732 country.  But you won’t hear anyone call the state Joisey.  That’s an invention, says Rutgers linguist Fay Yeager.  Our state may be a punch line in the Midwest, but we’d drop the r and say Juh-sey.  If someone makes that joke, you tell him or her, “Pah-don me, but you ahn’t pr’nouncin’ it right.”  She says our talk is distinctive because we drop the th diphthong and the r sound.  Curiously, we began dropping the r’s back in the 1920 to sound more upper class, like the British — saying finga instead of finger.

There also were waves of immigrants who brought their own pronunciations.  Go to a market and ask for half a pound of capicola and the deli clerk will repeat gabacoal.  Your mozzarella becomes mutzadell, ricotta ree-goat, prosciutto pruh-zoot.  It’s a carry-over of southern Italian reinforced by TV episodes of the Sopranos and Jersey Shore.  My German-American Dad once asked a cop for directions to the “Gettals Bridge.”  The officer gaped and said, “You mean Gothals.”

The th sound is unusual in many languages, so it disappears or becomes a d sound, as in “We been tru dis tree times already.”  Fuhgeddaboudit!  The German-Pennsylvania Dutch influence in northwest Jersey does use the th sound as it was intended.

Linguists are even trying to pinpoint county word choices, noting that Monmouth and northern Ocean say downspout (the pipe carrying “war-der”— water— off the roof), sprinkles instead of jimmies, and sub instead of hoagie or hero.  You might also identify a firefly and not a lightning bug if you’re in south Jersey.  In Atlantic County, you won’t hear about the bennies as much as you will the shubies — those tourists coming in on the A.C. Expressway with picnics in a “shoe box.”

TV and our mobile population are wiping out these small, but beautiful, differences in accent and language.  Marketers have us calling the Era laundry detergent Air-a and not Eer-a, while the McDonalds folks in their Illinois headquarters advertise breakfast hotcakes — not pancakes.

Pretty soon, tawking Joisey will be a thing of the past.