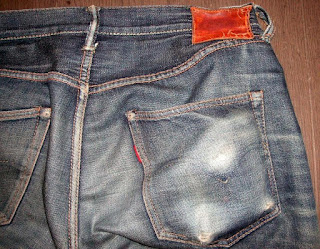 Some four decades ago, my six-year-old son Billy howled that his pants scratched.  It was 8:24 a.m. and we had to be out of our apartment and on New York’s Avenue B bus in ten minutes.  No point in arguing.  Had to change the pants and get to school on time.  His Montessori school was crazier about punctuality than scholarship.


The only thing left in his bureau was bluejeans, cuffs falling into a tangle of loose threads, patches on both knees – one red and the other pink – from mill ends my wife Judy used to make a quilt.  Finished off with yellow work boots, it was a utilitarian outfit for a six-year-old to go conquer the world.  His school wasn’t like my school was.


Back in rural Oregon, my mother forbade me to wear bluejeans to school.  No, they weren’t “denims” or “dungarees.”  They were bluejeans.  One word, unhyphenated.  And the middle class ethic dictated against wearing “play clothes” to school.  Mom insisted, “If we don’t set an example for the rest of the town, who will?  The newspaper publisher’s son?  Dr. Kauffman’s son?  Certainly not the farm children.”
At 8:24 that morning I was wearing a button down Oxford-cloth shirt, a rep tie and a blue wool suit.  My pants scratched too.


And I envied the people who passed by my office on Third Avenue.  Back then, their Levi jackets were an artist’s canvas of embroidery, probably sewn lovingly by barefoot hipsters on Bleecker Street.  Their clothes didn’t scratch.


Some years earlier I worked for Western Electric in Kearny, NJ.  This vast factory boasted more than 10,000 employees.  My job, among other tasks, was to interview retiring employees and sum up their expectations in 50 words of copy for the employee newspaper I edited.  After talking with one – any one – I might pass him in the hall two hours later and be totally unable to recognize him.  They wore gray (scratchy?) suits for their exit interview.  White socks.  Brown shoes.  Had short hair.  All seemed uniformly gray-skinned.  All said they were going to watch sports on TV and then putter around their gardens in Toms River.  So unless I associated each person with a mnemonic clue – a scar here, a missing finger there, a VFW pin in the lapel – I couldn’t recognize him in passing two hours later.  (The women were different.  Their curves and hairstyles made them individuals.)


Another realization soon hit me.  In six months, I was also writing their obituaries.  My job was to chronicle both departures.  These people not only looked alike, they subscribed to the same short destinies.


The U.S. Army had taught me, painfully, that one salutes the uniform, not the officer in it.  The nagging, unanswered question that stayed with me during those years was: Were they defensive about producing better uniforms than officers?  At the Bell System, people wore a company uniform, just as I’d worn a uniform at school.  One respected the uniform, not the student.  Not the employee.  Not the officer.  Not the person concealed in those clothes.


I went home that night of the scratchy pants incident, and I hung up my suit from Macy’s on a varnished wooden hanger.  Then I pulled on my bluejeans and a blue T-shirt.  I stuck my feet into a pair of engineer boots that had cost me a buck in the summer of 1970 – hand-me-downs from a fellow landscaper.  I was eminently comfortable.


Somewhere in Westchester County at that very moment there was a man – an acquaintance – who’d also changed.  He was the treasurer of a large, century-old corporation.  When he came home, he changed out of his five hundred dollar suit and into cowboy clothes.  A real costume, not just bluejeans.  Then, I suppose he sat down to read his mail.


Perhaps his pants also scratched at work.
I mentioned this to my wife, and she said we were both looking for lost innocence.  Maybe, but I’d maintain the cowboy executive had psychological issues I don’t share.  At least people can’t say they don’t recognize him when he’s in the front yard looking like Roy Rogers.  They don’t say, “There goes old what’s-his name.”


When I’m in jeans the jeans are me. a blueprint of my character, a silhouette portrait of all my faults and perfections.  No pretense.  I wear them and the psyche doesn’t itch.
at 8:37 AM No comments: