Where’s the Misery on Mount Misery? 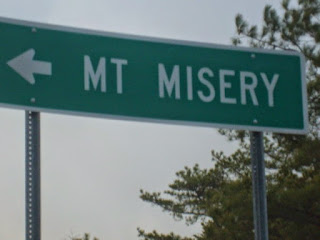 Travel west in New Jersey on Rt. 70 to about mile marker 28 and you’ll see a sign for Mt. Misery Rd. on your left.  You may not have driven this two-lane asphalt before, but plenty of teenagers are reputed to take their dates down the creepy road that gets narrower and narrower as the trees form an overhead canopy.


And then the kids begin to tell ghost stories.  In fact, many report strange tales like this one on chat rooms like AlienHub.com:  “As I was driving…I didn’t realize how deep I had driven.  As a result of my stupidity, we became lost, trying all different ways, but could not find anything that pointed us in the right direction.  That’s when I noticed my three-quarter full gas tank was now was empty to a point where the E-light was on.  We were all starting to panic a little.  Then we saw this huge, slow-moving object in the night sky.


“This giant thing in the sky was quieter than silence itself.  My two friends kept telling me to go, but I was not about to jet away from this amazing experience.  So I stopped the car (but left it running, totally disregarding the E-light), and stepped out to get a better look.  It was breathtaking. It was even bigger than I had originally thought and it was moving towards the car.


“The underside was beautiful.  Four bright blue lights and two or three white lights.  The shape of the object…kind of looked circular, but not flying saucer.  Whatever that thing was it was moving too slowly and too silently to be anything manmade.  Then it was time to leave.  Gas supply was running really low at this point. Eventually, we made it back to the main road, and started on our journey home.  Over the tree tops we were still able to see whatever it was [until] it finally disappeared.  I looked at my gas-gauge.  It was once again three-quarters full.”


Curious thing is that there is no mountain and no misery on this stretch of road.  In the 18th century, according to the Pine Barrens Tribune, French Huguenots settled in this part of the Pine Barrens.  They named it Misericordia, a place of mercy.  Fast forward to 1947, and the Pinelands Center summer camp was established at the end of the road.  The United Methodist Church of New Jersey owned and ran the camp, open to everyone regardless of religious affiliation.  The 150-acre site is surrounded on most sides by cranberry bogs and preserved forestland, including miles of trails in Brendan T. Byrne State Park.  It’s now a place for camping, retreats and a conservation center. 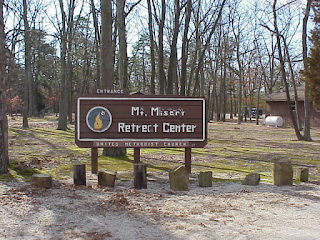 Year round, the Center offers camping in contemporary cabins with electricity and water, outpost cabins that are a bit more primitive, and field camping.  Nestled in the Green Cathedral is an area for worship or contemplation.  And, there are a range of activities, from swimming and boating on the lake, miles of nature hikes.


The Pinelands Center is at 801 Mount Misery Rd., Pemberton.  The main office can be reached at 609-893-3352, and their Internet site is at www.pinelandscenter.org.  It’s worth your time to take a look, but there’s no guarantee you’ll encounter any ghosts or UFOs.
at 8:06 AM No comments: