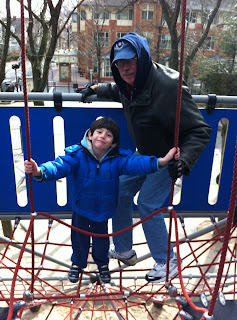 An obsessed writer with grandson, tightwiring in Cambridge a few days ago.

I hate to be hyperkinetic, but then O. Henry used to knock out a short story every week against deadline. And Howard Garis, creator of Uncle Wiggily and copywriter for The Newark News, did a daily children’s tale. Somehow, I’ve felt compelled to write short genre fiction and get them the hell up, online or in print, for pay or for peanuts. Is there a psychological term for that? Obsessive Compulsive Disorder or something.

Doesn’t matter. “Another Way to View a River” was published Feb. 12 by Short-Story.Me (at http://www.short-story.me/crime-stories/408-another-way-to-view-a-river.html). I liked this character-driven crime piece. There’s a short time when you’re on a roll — hot car, slick girl and some money — before things start sliding downhill. Then you need to sit back and figure out what just happened.

A day later, “Nun on the Run” ran in Every Day Fiction (at http://www.everydayfiction.com/nun-on-the-run-by-walt-giersbach/comment-page-1/#comment-39493). A late-night cab ride can become an invitation to realize a fantasy. And where are the dividing lines between the living and the dead, the real and the pretext in New York City? Readers either laughed till the tears ran down their leg or else they hated it.

Upcoming is “What Charlie Left Out in His Letters Home,” accepted by Writer’s Haven Feb. 18. It’s tough adapting to New York City when there aren’t any ground rules for survival. And some things are best not included in the letters home. It’s a look into an urban legend…but I have friends who swear the incident really happened. I'll put a link up when the story goes live.

So, back to this OCD writing problem. I figuratively tripped over a humor piece I’d written and forgotten. “Bin Laden’s Journals” was published in The Short Humour Site on Feb. 4 (at http://www.short-humour.org.uk/3writersshowcase/binladensjournal.htm). See? It’s either write or bite my nails.
at 9:02 AM 2 comments:

Writing Update: Darcie Chan’s and Mine

A couple of things have been going around this week. I just finished reading Darcie Chan’s e-book, The Mill River Recluse. It’s the very articulate story of a disfigured, wealthy Vermont widow living alone in her marble mansion. At her death, she bestows her fortune on the townspeople who barely know her. Only the town’s priest — her sole contact with her neighbors — knows her secret phobia created by a childhood rape and an abusive husband. This is a story of triumphs over tragedy, insights into friendship, and love that comes from unexpected places.

It’s also an amazing accomplishment for Ms. Chan. First, I enjoyed the story enough to send a thumbnail review over to Anne Bendheim, books editor at the Asbury Park Press. (It should be in print shortly.) Second, the “amazing” part is that Chan is a youngish lawyer who drafts environmental legislation — not a novelist. Recluse is her first book, and was self-published when publishers rejected it. Word of mouth, I presume, garnered sales of the 99 cent book, she took out some advertising and — voila! — sales have gone over 400,000 copies. She’s now on the New York Times best seller list.

I wrote Chan, “I'm a few weeks late in telling you I loved The Mill River Recluse,” and have drafted the thumbnail book review. She responded, “I am thrilled that you enjoyed Recluse, and I am so excited about the review! Thank you so, so much. You probably know that it is very difficult to get any kind of review of any self-published book into any mainstream newspaper, so I really appreciate this.” Don’t tell me it’s tough getting reviews. I have two collections of short stories just waiting.

Second item is that Every Day Fiction — one of my fave online publishers — has accepted “Nun on the Run.” This will be the seventh story of mine to go up at EDF. The 800-word story covers a late-night cab ride that becomes an invitation to realize a fantasy. And where are the dividing lines between the living and the dead, the real and the pretext in New York City?

“Nun” was actually written in 2006 in response to a prompt put up on Wordtrip, but I never submitted it. Rewriting it with some added depth to diminish the ending collected these comments: “This one made me laugh. I wasn't expecting the ending,” said one reader. The publisher commented, “The ending is a bit of a punchline, sure, but the storytelling is strong enough to make it work for me.” Look for it in March or April.
at 9:01 AM No comments: