Take Me Back to the Ball Game

Ready for an argument?  Tell your buddies that Abner Doubleday did not invent the game of baseball in Cooperstown in 1839.  The first official game, you say, was played by the Knickerbocker Base Ball Club at the Elysian Fields in Hoboken, N.J., on June 19, 1846.  The New York Base Ball Club defeated the Knickerbockers 23-1.  That’s how the City of Hoboken reports the first officially recorded match played under Alexander Joy Cartright’s rules, and he was an umpire.


But, wait a minute, the same news story refers to earlier games played there.  It stated, “A friendly match of the time-honored game of Base was played yesterday at the Elysian Fields, Hoboken.”  There was a rematch on Oct. 24 at the Star Club on Myrtle Avenue in Brooklyn.  (New York won that game too, 37-19.)  If you go looking for the Elysian Fields, the area is now occupied by a Maxwell House Coffee plant.


What the heck?  The game probably evolved from a number of enthusiastic players and fans in the mid-1840s.  According to Dr. David Q. Voight in a three-volume history of baseball, the game probably came from the 18th century English game of rounders.  Rounders was also played by soldiers at Valley Forge when they weren’t fighting the Redcoats.


So let’s establish our history by the rules of the game.  A New York Times story in 1990 reported, “Box scores for the two October 1845 games, played with eight men a team, follow the categories of cricket, reporting only the number of runs and ‘hands out,’ or number of times a hitter made an out.”  Cricket lost its popularity only after the Civil War.


As for General Abner Doubleday in 1839, well, he was a cadet at West Point  when he was supposed to have laid out the first baseball diamond.  And he never took credit for anything having to do with baseball.  This poses a problem for the Baseball Hall of Fame in Cooperstown, NY.  Historian and author John Bowman said, “They want to play it both ways.  They want to be known as serious historians of the game, but they can’t undermine their tourist business.”


And Cooperstown has copyrighted the phrase, “Birthplace of Baseball.”  So there!
at 8:04 AM No comments: 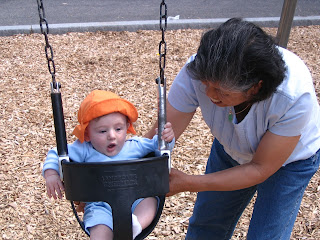 Judy and I had gone through the ritual of seeing our daughter and son-in-law begin their life together.  There had been the wedding shower followed by the ceremony on Cape Cod, some financial help in their buying a condo, and the baby shower — all proceeding in natural order.  We eagerly awaited the birth of the baby and were at the parents’ bedside when Zeke Addison Kramer was born in Cambridge in early January of 2007.


Judy asked suddenly on an unnaturally warm winter day, “What do you think of our spending a year in Cambridge, helping them care for the baby so Lisa can go back to work?”  Zeke was then a week old.


“Out of the question,” I said.  “No way will I babysit for a year.  We’re 67 years old.”  Massachusetts was a two-and-a-half hour drive from our center hall four-bedroom colonial in Connecticut.  “We’ll visit Cambridge.  Regularly.”


When I told a friend I might leave Connecticut to babysit a grandson, she shouted, “You’re out of your effing mind!”


Judy rolled out the arguments in the coming days as my heart sank: “This 2,500-square-foot house is too big for empty-nesters,” and Bethel taxes are outrageously high, child-care is unaffordable, one doesn’t put a new-born in the care of a commercial institution, and Lisa’s career will otherwise be jeopardized.


I’m sensitive to the plight of American Career Moms.  I’ve written sympathetically about women in their mid to late thirties, filled with wisdom and maturity and character to make intelligent choices, who have to halt their career to raise a child.  I knew that when these women are in their forties they can try to regain the momentum of their careers, but will they still be interested in what they were trained for two decades earlier, and will their career fields have left them behind?  So they find a job, work for fifteen more years or so, then spend the final twenty years in retirement before dying.  This may be overly dramatic (hey, I’m a writer!), but it was a solid (to my wife) reason to help out at this stage of the game.


I made a mental list of the pros and cons of moving.  On the credit side was the altruistic rationale, plus a large amount of money from selling a priced-up house.  In the debit column were the loss of friends, a writing group that was like a second family, a bucolic yard surrounded by woods where I’d stroll with a beer at sunset, a cat that would have to be re-adopted by her original mistress, a home that was also two and a half hours from our son’s family in New Jersey.  All of my reasons were daunting — and irrelevant.


Three months later, we moved into a 20th floor apartment across from the town reservoir and park, trading space and environment for a two-bedroom rental.  It was a step back forty years to our first apartments in New York City, except we were substituting a concierge for cockroaches.


Cambridge’s reverse 911 calls began reminding us to move any cars for the street cleaners or be towed.  The cracked pavement in front of century-old “triple-decker” houses required Judy, me and Zeke to traipse single file in our little convoy of baby carriage and market basket.  We faced the bureaucracy of getting new licenses and plates and auto inspections from angry clerks.  Voting privileges were granted, but did I care?


And then, wondrously, we began feeling like new parents.  Zeke was the charming baby who came to us every morning.  I was enchanted that he liked my grapefruit (and, with his perfect eyesight, the olives in my martini at night).  It was a joy putting him in his first swing at the park, buying baby clothes on Arsenal St., strolling with him to the Bryn Mawr used book store, story time at the library, and lunching at Whole Foods.


What I discovered was everything I'd missed when our own children were growing up and I was commuting two hours in and out of Manhattan for 25 years.  Would I have traded it for being a stay-at-home dad?  Perhaps not, but in Cambridge I didn’t feel like a visitor to my own home town.  And being a new parent was an adventure.
at 9:52 AM No comments: