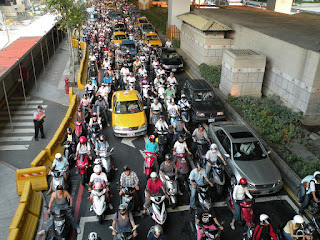 No one says, “See Taipei and die.” Naples, yes. The capital of Taiwan, not really. Dying while on vacation is not a good slogan, but it’s a distinct possibility.

In May 2006, six years since I had previously visited Taiwan, the pace of traffic and people in Taipei increased exponentially. Scores of dusty scooters swarmed in packs of mechanical insects like a Ridley Scott movie. Crowds of shoppers were thicker and more erratic as they darted around stalls. Sounds were louder and more intrusive. (The irritating, repeating melody in the street made me demand, “Can’t anyone shut up that ice cream truck?” I was told that was the trash pickup alerting people to bring their garbage down to the street.) Live rock bands were amplified over the heads of hip students ambling through Peddlers Alley in Hsimenting.

“Be careful,” my host Ming-tse Chen warned, grabbing my arm and pulling me away from harm again.

I’m cautious about crossing streets in London and Paris, but in Taipei the pedestrian needs another set of eyes to spot scooters driving against traffic, zooming onto the sidewalk to park or dodging to the head of the cars at a stop light. The Taipei Times reported a 74-year-old man was run over and killed by a scooter during my visit; an 80-year-old woman was run down the day before.

I pointed at cars driving at night without headlights, and asked Ming’s daughter if there wasn’t a law about headlights. Nancy had just received her Master’s degree from Drexel University in Philadelphia. “Probably they can see okay,” she said. “They don’t think they need headlights.” But what about me when I crash into a darkened car? The last time I drove in Taipei I only had to watch out for ox carts and pedicabs.

Today, this is truly the city of the quick and the dead.

Sidewalks, except on the main thoroughfares, are about eight feet wide, with half of that space filled with scooters parked handlebar to handlebar. The walkways are often a foot or more above the street, and between shops the sidewalk can make a sudden drop of a step or two. Looking down from the rooftop of Ming’s house across the Hsin Tien River from Taipei I notice the sidewalk has a two-foot-high drop-off at the corner.

I’m not a nervous person, but I began noticing things. The balusters on Ming’s staircase are wide enough apart that a curious child could crawl through. And, at six feet tall, I had to duck my head going down staircases.

There’s no smothering life preserver over every aspect of living in Taipei. Quite the opposite. I’m expected to be twice shy when I’m once burned. This is why the people of Taipei are very, very alert.

It's not that no one recognizes dangerous situations. For example, friends refuse those single-use chopsticks from China now because there’s a bleaching agent in them that poses a hazard. An issue of the China Post reported legislative action to prohibit shoddy and dangerous PRC imports that are “dumped” in night markets like Shihlin Yesheh. And, the law requires seat belts when sitting in the front seat of a car — even in a taxi with the driver watching DVDs.

I don't want to break my neck on a sidewalk in Taipei, and nothing could be more ignominious than being run over by a cabbie watching a skin movie. But daily life here has impact, noise, and elements of confusion, conflict and chaos.

I can almost see the dice roll when I step out the front door. Taipei is a pinball machine with the pedestrian in play.

Over the chaos stands Taipei 101, currently the world’s second tallest building, looking like a serene scepter from a Buddhist temple and just as other-worldly.
at 7:47 AM 1 comment: