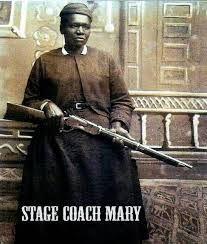 Stagecoach Mary Fields has several claims to fame, both admirable and notorious. She's best remembered, when remembered at all, as the second woman to officially carry the U.S. mail and the first African-American to do so. Of more notoriety, Mary shot a cowboy and created enough problems to get her kicked out of the nunnery where she had been staying.

Fields stood 6 feet tall and reputedly weighed about 200 pounds, liked to smoke cigars, and was said to be as "black as burnt over prairie." She often had a pistol strapped under her apron, carried a 10-gauge shotgun, and had a jug of whiskey by her side.

Born a slave in Hickman County, Tennessee about 1832, during Andrew Jackson's administration, she was freed with the Emancipation Proclamation. Unlike many slaves, Fields had learned to read and write. She then worked at the home of Judge Edmund Dunne. When Dunne's wife, Josephine, died in 1883, Fields took the family's five children to their aunt, Mother Mary Amadeus, the mother superior of the Ursuline convent in Toledo, Ohio.

Mother Mary Amadeus was sent to Montana the following year to establish St. Peter's Mission, a school for Native Americans west of the town of Cascade. When Fields learned that Mother Mary was ill with pneumonia, she hurried west to care for her. Mother Mary recovered, and Fields stayed on in Cascade to haul freight to keep the school functioning. She also chopped wood, did stone work and rough carpentry, ending up as forewoman of the crew. When needed, she made supply runs to the train stop and even to Great Falls and Helena.

It was on one such run, Fields' wagon was attacked by wolves. The horses bolted and overturned the wagon. Anecdotal evidence says Fields kept the wolves away with her revolver and gun. At dawn's light, she got the freight to the school to the nuns' relief. In no small part, the nuns had invested $30 for the food and, when a keg of molasses was found to have broken Fields was docked a portion of her pay for the loss.

Native Americans in the area called her White Crow because "She acts like a white woman but has black skin." The local whites were a bit more mystified, and one schoolgirl is quoted as writing, "she drinks whiskey, and she swears, and she is a republican, which makes her a low foul creature."

Life went on for a decade until there were complaints and an incident with a disgruntled man that involved gunplay. It was widely recognized that Fields had a temper. The Great Falls Examiner, Cascade's newspaper, reported Fields broke more noses than any other person in central Montana.

A hired hand at the mission once bitched that she was earning $2 a month more than he, and why was she worth that being only an uppity colored woman? He voiced his gripe at the local saloon where Fields was a regular customer, and he complained directly to Bishop Filbus N.E. Berwanger himself.

This made Fields' blood boil.   Next chance, Fields and the hired hand had a shootout behind the nunnery next to the sheep shed. She'd gone after the man simply to shoot him as he cleaned the latrine, figuring perhaps to dump his body there. She missed, he shot back and the fight was on! Bullets flew until both their guns were empty. The only blood spilled, however, came when one of Fields' bullets ricocheted and hit the man in the left buttock, ruining his new $1.85 trousers. Then the bullet passed through the bishop's laundry, ventilating his drawers and two white shirts that had been shipped from Boston the week before.

The bishop, incensed, ordered Fields to leave the convent.

Ever resourceful, and with the help of Mother Mary Amadeus, Fields opened a restaurant in Cascade. She was reputed to serve food to anyone regardless of their ability to pay. The restaurant went broke ten months later.

In spite of Fields being in her 60s in 1895, she was then hired as a mail carrier because she was the fastest applicant to hitch a team of horses. She drove the horses and coach, along with her mule, Moses. This earned her the nickname of "Stagecoach Mary." When the Montana snows grew too deep for the coach to continue on a run, Mary would don snowshoes, shoulder the mail bags, and begin walking with Moses, never missing a day of work.

At the age of 72, Fields decided to slow down. The mission nuns helped her open a laundry service in Cascade. In addition, she tended her garden.

One customer, however, failed to pay up because she hadn't put extra starch into his shirt cuffs and collar. Hearing him in the street, Fields left the saloon and knocked him flat with one blow. She told her drinking companions that the satisfaction from this act was worth more than what she was owed. The hapless customer also allowed that the tooth Fields knocked out was the one that had been giving him trouble. Both were satisfied.

Stagecoach Mary grew to become a respected figure in Cascade, and the town closed its school to celebrate her birthday. When Montana passed a law forbidding women to drink in saloons, Cascade's mayor granted her an exception.

When Mary wasn't cleaning, she babysat children, became friends with Gary Cooper, got free food and liquor wherever she went, and attended every home game the Cascade baseball team played. According to local sources, she gave flowers from her garden to any player who hit a home run, and would rain a fury of fire and profanity on any umpires who made a bad call against the home team. Despite her gruff exterior, Mary was also kind hearted, and so beloved by the townspeople Cascade that when her home burned down in the fire of 1912, everyone got together and built her a new one.

Fields died of liver problems in 1914 at the age of about 82. Actor and Montana native Gary Cooper wrote of her in Ebony magazine, "Born a slave somewhere in Tennessee, Mary lived to become one of the freest souls ever to draw a breath, or a .38."